Hugo Maria Fernandes worked at the CAVR from 2002 to 2005 as a head of Truth-Seeking Division and Co-Managing Editor for Chega! Report. From 2005–2008, Hugo worked as a Coordinator for Research Team and Co-Editor for the CTF Final Report, Per Memoriam Ad Spem.

From 2008–2017, Hugo Fernandes worked at The Asia Foundation, Timor-Leste as Director of Policy and Institutional Strengthening and Team Leader for Support for Good Public Policy Program. In the sector of journalism and media, in 1999, Hugo Maria Fernandes was a founding member of the Timor-Leste Journalist Association (AJTL). In 2014 he was a founding member and Co-Chair ba Southeast Asian Journalists Union (SEAJU) for the period of 2014-2017.  Presently, he is a Councilor of the Timor-Leste’s Press Council for the period of 2016 – 2020.

As a Executive Director of Centro Chega!, Hugo Maria Fernandes responsible for the management of the works and activities of the Center and is answerable to the Board of Directors. 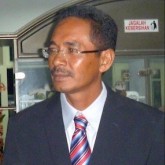